The Dene people (also known as South Slavey) historically and contemporarily inhabit the Northwest Territories and parts of Northern British Columbia and Yukon Territory. Living off the land, our ancestors hunted and trapped, built canoes out of moose hides and wood, and practiced traditional artisanship like beading and quillwork. 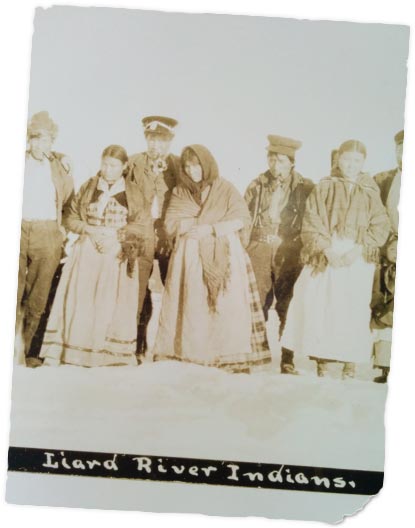 In 1859, the Fort Liard Mission was founded by Father Zephirin Gascon, an oblate missionary of Mary Immaculate. The impact of missionaries and the Grey Nuns who inhabited the area lives on to this day; the original Mission building stands as part of Fort Liard’s history, and the influence of the nuns on arts and crafts is reflected in popular contemporary patterns like flowers, birds, and animals.

In the past, the Acho Dene Koe have been referred to by various names, the most common name is Fort Liard, or the Fort Liard Band, in reference to the Hudson Bay Company fort located in the center of Acho Dene Koe territory.

Following the establishment of the Fort Liard Mission, the Acho Dene Koe traditional economy involved the hunting of moose and caribou, trapping of smaller animals, fishing and gathering plant goods for barter and trade. While often referred to as “traditional practices” these activities continue to be performed by contemporary members of Acho Dene Koe First Nation.

In recent times, the history of the Acho Dene Koe community parallels the changes brought to northern Canada after the signing of Treaty 11 and the arrival of resource seekers including traders, miners, and more recently, oil and gas developers. Today Acho Dene Koe First Nation leadership is committed to preserving our history, culture and the traditional practices of our people in response to increased industrial development in the territory.